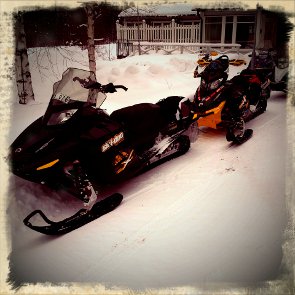 There are reindeers in the northern part of Sweden. Nothing new there. Everybody who has met them when traveling by car know about their lack of sense, just standing there on the road staring and refusing to move. But the meat is tasty so I guess it's alright.

So when heading inlands (~50km of the eastern coast) it was a safe bet to expect to see a bunch of reindeers. Something that surprised me a bit was that I saw even more snowmobiles (~15) outside the restaurant where we had lunch. Oh well, I guess I'm not used to all the aspects of winter in the north. 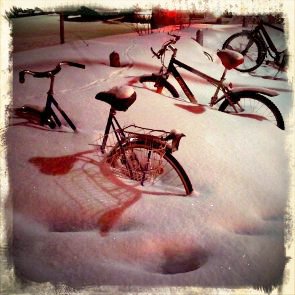 I like cycling and it's painful to see bikes forgotten and almost getting lost in the snow. Okay, I admit that winter might not be the best time for cycling, but at least, take care of your bike so it'll still be around when spring arrives!

As a side not, I was told that one picture per week wasn't posting often enough - specially since there are many interesting photos that never end up on the web. To try and fix this, the posting schedule is roughly Wednesdays and once during the weekend. 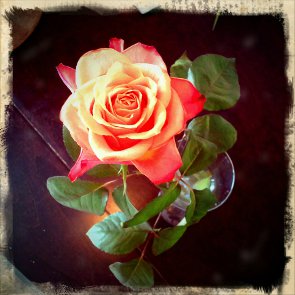 The flowers from last week has been thrown out but they aren't missed since we have a lovely rose instead. A much appreciated gift I got for Valentines Day. 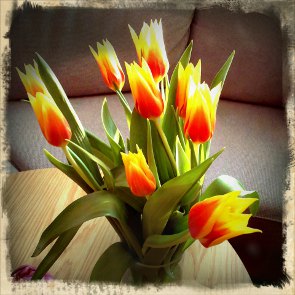 I like having lots of green plants in the apartment and sometimes when there are flower buds, I get curious and hope for something to photograph.

We picked up these at the store doing the weekly shopping and I hope they'll last quite long.

Week 05: Back to University 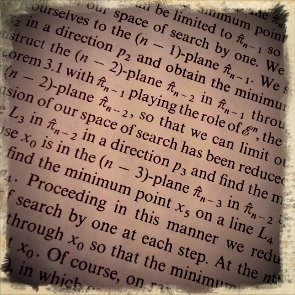 The start of February has been a big change for me, I've moved down to working part time at my previous job and 'll spend the rest of my time at the university mostly doing research.

This weeks image is a tribute to math which can be verify beautiful, specially some mathematical proofs.